* Meeting and seminar rooms available throughout the year.

On 30 April 1942, the little community Telavåg on the coast of Sotra was razed to the ground. The killing of a Norwegian agent and two Gestapo officers triggered the Telavåg tragedy.

Resistance fighting that ended in tragedy

Up until 1942, Telavåg was a small and little known fishing community out on the coast. Its brave inhabitants and seamen were used to the sea, which made Telavåg the perfect location for the North Sea traffic, the illegal boat traffic between Norway and the UK during World War II. This was also to prove fateful for Telavåg.

One April day in 1942, two agents from the UK arrived in Telavåg. They were kept hidden by the locals. An informer got wind of this and informed the Gestapo. Fighting broke out when they arrived in Telavåg. One of the Norwegian agents and two Gestapo officers were killed. The occupation forces exacted a terrible revenge a few days later. Every house, outhouse and boathouse was blown up and razed to the ground. Women, children and the elderly were initially interned at Storetveit in Bergen, then later at Framnes in Hardanger. All the men aged between 16 and 60 were sent to German concentration camps. Almost half of them never came back.

Exhibitions
The museum has a new permanent exhibition about the Telavåg tragedy and North Sea traffic during World War II, and changing exhibitions that focus on war and peace. Visitors can see rare artefacts and authentic photos and can borrow free audio guides in Norwegian, English and German.

Digital guided tour with historic app:
The museum is a monument to those from Telavåg who lost their lives. You can use the mobile phone app ‘Telavåg 1942’ to guide you around the sites of interest in Telavåg. The app is available in Norwegian and English.

Experience nature:
You can combine a visit to the museum with a walk on one of the many walking trails in the area. The museum can also arrange for a guide to accompany you on a walk on the beautiful North Sea Trail.

Museum café and shop
The museum shop sells books and a good range of gift items and souvenirs. Many of the items are produced locally.

You can enjoy spectacular views of the sea and the rebuilt houses of Telavåg from the café. It has a large terrace where you can sit when the weather is fine. Freshly-made pancakes and cakes are on the menu every day, and groups that book in advance can request a more varied menu.

Conferences, meetings and catering:
The museum has an auditorium and meeting room, and is a suitable location for conferences, seminars, meetings, concerts etc. Catering companies of your choice can deliver food to the event.

The museum is universally designed.

By car: Follow the Rv 555 road from Bergen and turn left at the roundabout after the Kolltveit Tunnel. Drive straight ahead past Fjell, Tellnes, Skogsvågskiftet and Hammarsland. Then turn right after Kørelen, a large lake on the right, and follow the signs towards Telavåg. The North Sea Traffic Museum is on the left before you come to Telavåg. It is an approx. 40-minute drive from Bergen.

By bus: Services 450 from the bus station to Skogsskiftet terminal, then bus 459 to Sælstø. 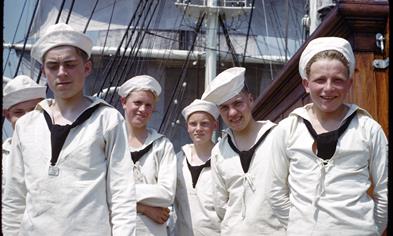 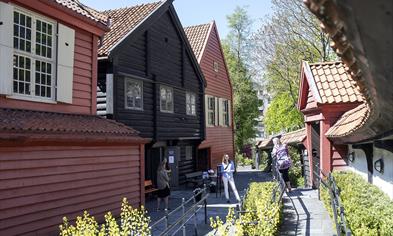 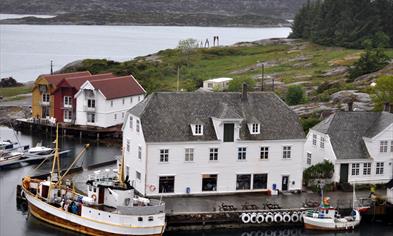 Glesvær Café and Catering, ØygardenThe building from where the café trades today was built in 1925. Enjoy a good cup of coffee in this characteristic cafe and soak up its historic…