You are here: Home Things To Do Bergen Cathedral 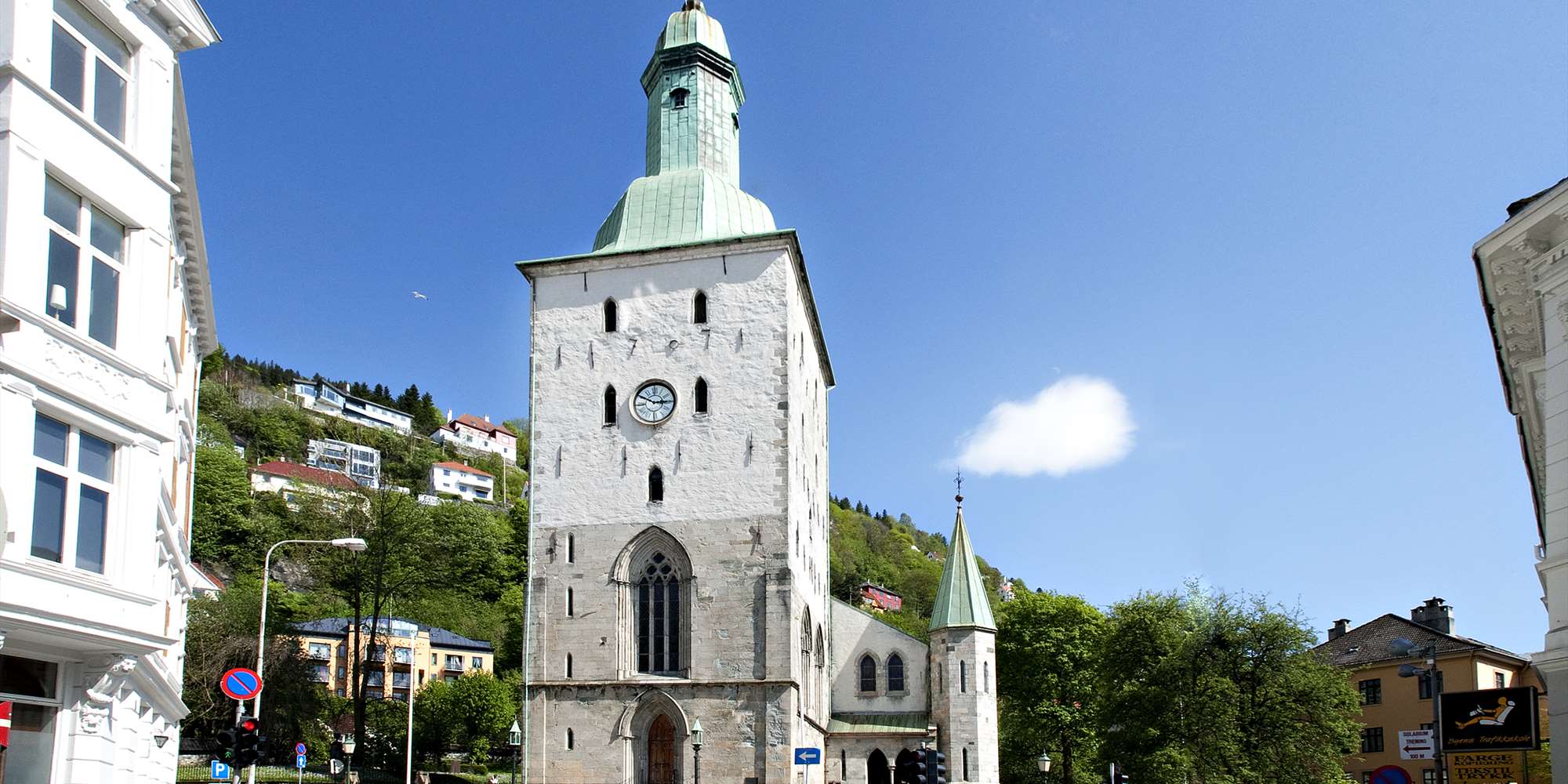 Bergen Cathedral is nearly 900 years old. It started as a church dedicated to Olav the Holy, Norway’s patron saint, around year 1150.

The first church was dedicated to Olav the Holy, Norway’s patron saint, and it was a small stone structure. The church is mentioned in king Sverre’s history and must have been built by 1150.

When the Franciscan friars came to Bergen in the first half of the 13th. century,  they were granted the use of the church. The church was heavily damaged by fire both in 1248 and in 1270. The benevolent king, Magnus “the Lawmender”, gave a generous donation, enabling the friars to build a beautiful church next to their convent. The Franciscan basilica was consecrated by bishop Narve in 1301. It was quite plain with almost no interior decoration, and this impression has been retained to this day.
We do not know much about the church between its consecration and the Reformation. Bergen was an important town when the Hanseatic League dominated Northern Europe, and several German merchants bestowed the church in their wills. The church was again damaged by fire in 1463 and in 1488.

When the Lutheran Reformation was introduced in Norway in 1537 by royal declaration in Copenhagen, the old cathedral at Bergenhus was in ruins, having made room for improvements of the fortification there. The first Lutheran bishop in the Diocese of Bjørgvin, claimed the old Franciscan basilica and made it the Cathedral of the country’s oldest diocese, and had the first organ, from Bremen, installed. The Cathedral was again rebuilt because of fires in 1623 and 1640. After the 1640 fire “a costly, large organ” was installed. A very thorough restoration took place in the 1880s. led by the architects Christie and Blix. The old rococo interior was literally thrown out and the Cathedral obtained mainly what is its present interior. In 1997 the Cathedral acquired an organ with 61 stops, built by Rieger Orgelbau of Austria.

The Cathedral
The splendid stonemasonry in the entrance hall was probably carved by the same stonemasons that carried out parts of the masonry of Westminster Abbey’s Chapter House. Note the beautiful windows. The portraits hanging here are of almost all the bishops of Bjørgvin since the Reformation. The monument in honour of bishop Johan Nordahl Brun, a famous poet who died in 1816, was donated by king Karl Johan. Here you will also find a memorial plaque in remembrance of the seamen in the Royal Norwegian Navy who lost their lives during the Second World War.

Above the main door there is a wonderful epitaph from 1652 showing the transfiguration on the mountain. In the church choir there is a plaque in remembrance of the church’s generous patron of the Middle Age, Magnus the Lawmender, who is buried in the choir. The stained glass windows were added to the choir during the restoration in the 1880s. At the bottom left (north side) you will find Adam from the Old Testament and above, the birth of Jesus – the new Adam (man). At the bottom of the stained glass window in the centre, you see the bronze snake in the desert, above is the crucifixion of Christ. Two small figures are St. Francis of Assisi and Clara Scifi, St. Francis’ first female follower. In the bottom right stained glass window (south side) Jonah and the whale are depicted and above these the resurrection of Christ. On this side you will also find the ark of Noah and the baptism of Christ by John the Baptist. In other words, the stained glass windows show how Jesus fulfils the Old Testament. At the very bottom of two of these stained glass windows we see the family shield of the Bergen merchant Sundt who paid for the four stained glass windows. In the other two windows you will see Olav the Holy – Norway’s eternal King (5) At the altar you will see Christ as the Pantokrator, the ruler of all things. He holds the world in one hand and the other is lifted in blessing. Christ is surrounded by the four Evangelists, each holding a book with their traditional sign. Underneath is written: “Jesu Kristi Guds sønns blod renser fra all synd” ( The blood of Jesus Christ the Son of God cleanses from all sin). 1 John 1, 7

The Old Vestry
The old Vestry and Chapter House was completed at the same time as the Cathedral in 1301. It has since the Reformation served three purposes: A storage for clerical vestments, a library and a meeting –room for the Chapter. The Vestry was restored in 1971, and rededicated by bishop Per Juvkam. The stained glass window, made by the artist T. Moseid, shows the risen Christ (9) Notice the wounds in Christ’s hands and feet and that the crown indicates both the royal crown and the crown of thorns. A modern crucifix was donated to the Cathedral in 1995. It is by the Montenegrinian artist Rados Dedic, in remembrance of the suffering of the “Yuogoslavian” people (8).

The Churchyard
In the churchyard there are two memorials well worth a visit. One is the grave of bishop and poet Johan Nordahl Brun. In Bergen he is first and foremost known as the author of “The Bergen Song”, and on his grave a cithar is depicted: “I took my newly- tuned cithar in hand”. The grave is situated on the northern side of the Cathedral.

On the southern side there is a memorial dedicated to two contemporary poets, Dorothea Engelbrektsdatter and Petter Dass. Dorothea was Norway’s first “poetinde” (poetess). In the bas-relief you can see her by her desk with an hour-glass and a skull, characteristic of her poetry. On the opposite side of the memorial there is a bas-relief of Petter Dass, a famous Norwegian priest and poet, with whom she corresponded (11).
Outside, the cannonball in the west wall of the façade of the Cathedral evokes special attention. It has been sitting here since the battle on the Bay of Bergen in 1665 between the British and Dutch Navies.
Text, Canon Jacob Frode Knudsen 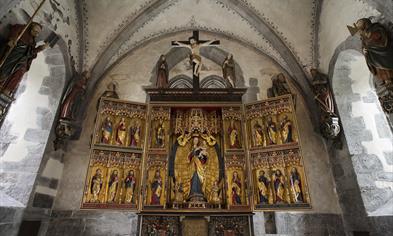 St. Mary's Church, BergenSt Mary`s church is the oldest existing building in Bergen. To judge by its architectural style, it was probably built between 1130 and 1170.