You are here: Things To Do St. Mary's Church 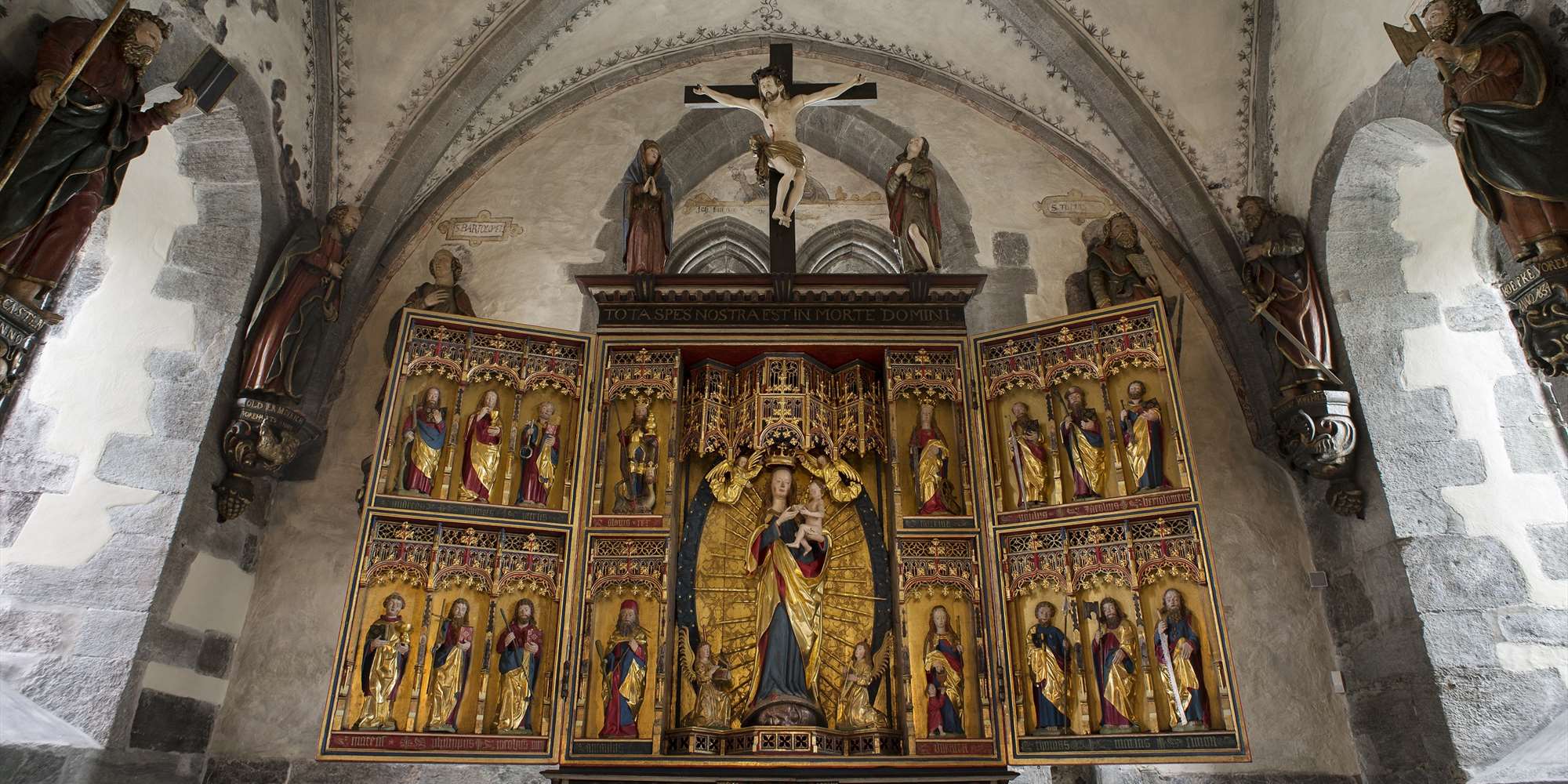 St Mary`s church is the oldest existing building in Bergen. To judge by its architectural style, it was probably built between 1130 and 1170.

St Mary`s church was ravaged by the two great fires which swept Bergen in 1198 and 1248. The church has been in continuous use since early medieval period. The church has recently been restored over a five year-period (reopened June 2015). The previous large restoration of the church was in the 1860`s.

Architecture
St Mary’s church is a basilica, i.e the body of the church is divided into a lofty nave and two lower side aisles with separate roofs. This is a feature borrowed from medieval cathedrals, and is relatively seldom found in an ordinary parish church. The two towers must be original though they must have been repaired after the fire in 1248. No other Norwegian church has such a west front!

The choir of the church must have been lengthened at some time. The eastern section, with its pointed windows and vaulting, bears the stamp of a later period than the rest of the church, and was probably constructed after the fire in 1248. The original choir consisted of the square space which makes up the western part of the consisting choir.

The portals
The portals of St Mary`s are of special interest. There are four in all, but the western portal (between the towers) has been added after the completion of the church. However, they are still original from the Middle Ages. The oldest of the portals, is the one in the northern side aisle. This type with its straight lintel crowned by a discharging-arch, can be traced back to Roman times, and was widely used in the Middle Ages. The portal in northern wall in, is totally different and more usually found in medial churches. The portal is recessed in three steps, so that the door lies approximately in the middle of the wall. The next step in development is the late Romanesque and Gothic grand portal, which is typical of the thirteenth century.

Each pair of shafts of the three orders is adorned with a different pattern which continuous round the arch, providing it with an exceptionally rich and varied moulding. In addition, we find in the portal arch, on the caps of the columns, and on the wall at each side of the portal, carvings of plants, animals and abstract ornaments which are difficult to place in any particular stylistic relationship. The portal seems to be the result of a fusion of impulses from different regions.

The alter reredos
This is the church oldest treasure, and can be traced to the end of the 15th century. It is North German work, probably from Lübeck. The screen is a triptych, the carving of the central panel depicting Mary and the infant Jesus. Here she is shown as the woman in Revelations:  «clothed with the sun, and the moon under her feet, and upon her head a crown of twelve starts». On her right we find St Olav, above St Antony, whose intercession was held to cure the plague. One her left stands St Catharine with her sword and wheel, above St Dorothea.  On the side panels we see all the apostles except Judas, but including Paul. All bear their symbols, and hold the book of Gospel. The hinged side panels were only unfolded in high festivals, their reserve sides facing the church at all other times. Here we find paintings «for every day use», but of a quality fully comparable to the carvings on the front of the panels. The paintings are all about the life of Jesus.

In the choir we also find fifteen life-sized figures, the twelve disciples, with Moses, John the Baptist, and Paul. They are from 1634. On the church floor we find the grave-stones of German sea capains, merchants and clergy of the sixteenth, seventeenth and eighteenth centuries. These stones were collected from all parts of the church, and laid down in the choir in the 1930`s. Against the south wall stand a choir stall from 1589, and a lectern bearing a bible printed in Nürnberg in 1692.

The pulpit of St Mary`s is something of an enigma in Norwegian art history; it resembles no other pulpit in the country. It was presented to the church in 1676, by a group of prominent merchants who had their place of business on the old Hanseatic Warf (Bryggen). Who actually made it is unknown, but the use of tortoiseshell and lacquer work is foreign to this country, and would suggest a link with countries connected with East Asia, perhaps Holland. The pulpit and the stair-case are divided into panels by richly decorated columns. Here we find eight of the nine original cardinal virtues, represented by women with various attributes. Penitence with a pelican, Prudence with a snake, the naked Truth, Chasity with two turtle doves, Patience with a lamb, Hope with a dove, and part of an anchor, Faith with book and cross, and Charity with two children.

Apart from the alter screen and the pulpit is the paintings of the church which attract interest. In the course of the seventeenth and eighteenth centuries the walls of St Mary`s were almost covered with paintings, most of them «commemorative paintings» dedicated to the memory of more or less prominent citizens connected with the church. The majority of these paintings were removed during the restoration work done in the 1860`s, but there are still many left.
On the walls of the nave, above the triforium apertures, faint traces are visible of medieval frescoes. These were uncovered during the 1930`s but are so fragmentary that they are almost incomprehensible when seen from the church floor.

The organ
The new Organ of St Mary`s Church was built by Weimbs Orgelbau from Hellenthal in the Eifel area in Germany. It has 31stops (38 ranks) on two manuals and pedal.
The organ facade was designed by the Swedish architect Ulf Oldæus. The instrument was built in 2014/2015 and the inauguration took place during the reopening of St. Mary’s Church on June 21th 2015. The sound is influenced by German Baroque Organs.

Additional information
Photography is not allowed
Postcards for sale
No use of voice amplifiers
St. Mary's Church has no toilet facilities for visitors
The Church is handicap accessible. 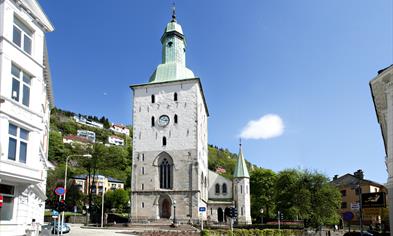 Bergen Cathedral, BergenBergen Cathedral is nearly 900 years old. It started as a church dedicated to Olav the Holy, Norway’s patron saint, around year 1150.