You are here: Home Things To Do Bergenhus Fortress 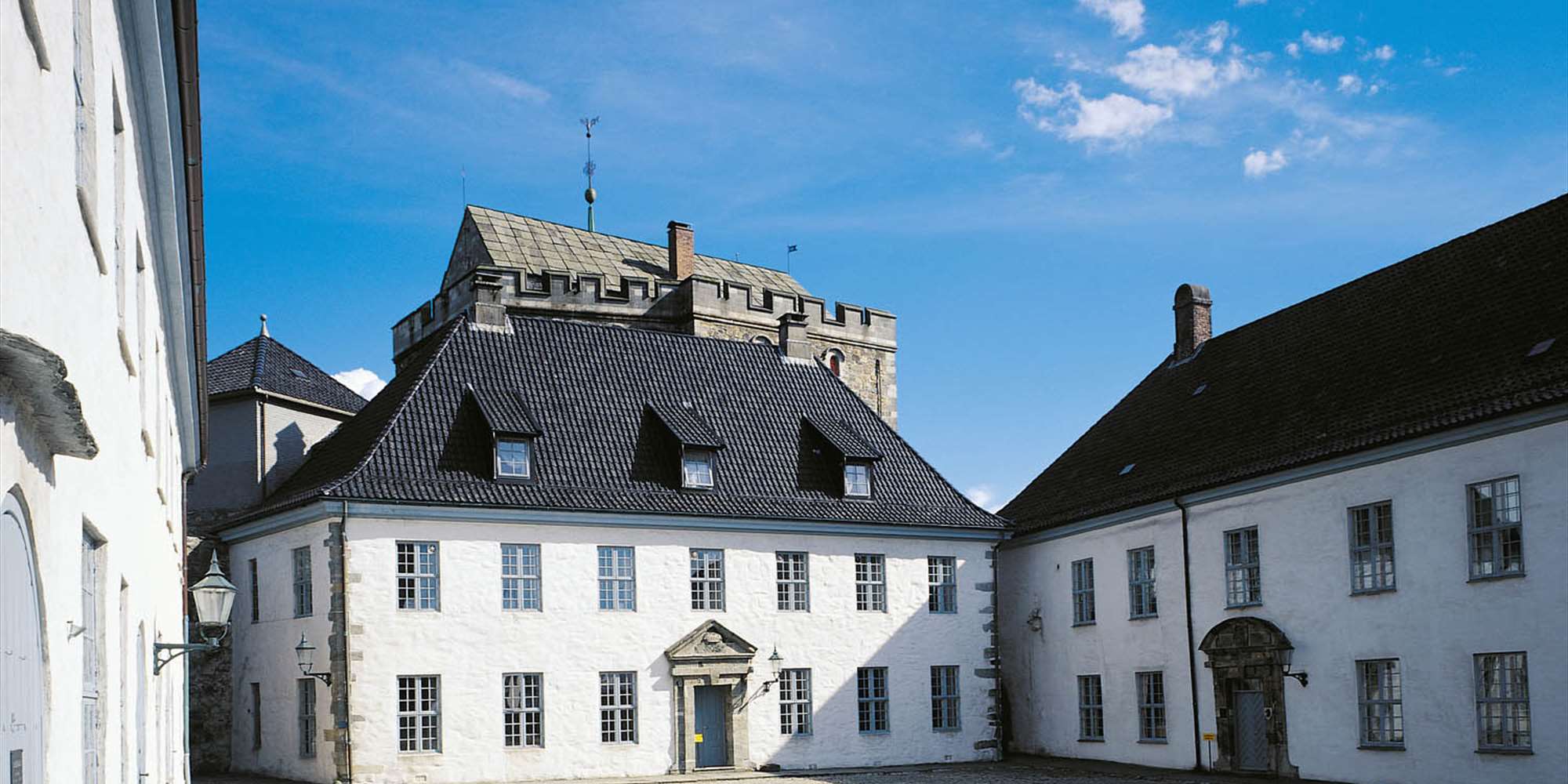 * The fortress can be closed on special occasions.

Bergenhus Fortress is one of Norway’s oldest and best preserved fortifications. The Fortress has a long history as a royal seat, episcopal see and military seat of power.

The area wich today make up the central area of Bergenhus Fortress are the grounds within the ramparts, originally known as Holmen, and Koengen and Sverresborg.

In the 1700s these three areas were consolidated into one vast military fortification, with the ramparts across Koengen joining Holmen and Sverresborg together. The ramparts at Koengen were eventyally torn down in 1809.

Military history
The building of the fortress at Bergenhus began in the early 1500s. The fortress was continually reinforced during the 1600s, finally reaching its most complete state at around 1700.

The only time it was under siege, however, was some years prior to this, on 2 August 1665. A large flotilla of Dutch ships sought refuge in the neutral harbour of Bergen when being pursued by English warships. When the English launched their attack, Bergenhus offered strong resistance. The battle did not last long, and became known as the Battle of Vågen.

During the Second World War, Bergenhus was again put into service; this time by the German occupying force, who used it as their western headquarters. The reinforced bunker in the centre og the fortress grounds was built by Soviet prisoners of war. An accidental explosion at Vågen on 20 April 1944 caused major damage to the oldest buildings in Bergenhus.

As soon the Second World War ended, the Norwegian government initiated work on restoring and preserving the area for posterity. The restoration work lasted until the mid-1960s.

Bergenhus fortress today
Bergenhus has been under consecutive commandantship since 1628. Today, approximately 220 military and civilian personnel have the fortress as their everyday place of work.

Most of the fortress grounds are open to the public, civilian tenants and for special events. Today the fortress complex serves as a venue for representation events, operatic and theater performances, large-scale rock concerts and other cultural events.

The complex is an attractive recreational area for both visitors to Bergen and the local population.

Driving and parking in the inner area of Bergenhus Fortress is prohibited, as this is a car-free zone. Certain commercial vehicles are admitted for deliveries, with a speed limit of 10 km/t.

Toilets:
There are toilets in the inner fortress area (behind the Main Guard). Toilets are open during the Fortress opening hours. Museums in the area have designated toilets for their own visitors.

Wheelchairs:
The outdoor spaces of the inner fortress and the Koengen concert venue have been adapted for wheelchair use (roads and walkways). Bergenhus Fortress Museum at Koengen has a lift. Unfortunately, there is no universal access to Håkonshallen or the Rosenkrantz Tower.

Pedestrian traffic and safety:
Bergenhus Fortress is surrounded by high walls. Some of these walls have not been secured. Exercise caution when walking along the fortress walls, and keep an eye on the children.

The Norwegian Defence Estates Agency carries out necessary maintenance and restoration work in our fortresses, including Bergenhus. We apologise for any inconvenience this may cause for visitors. Please note that all pedestrian traffic in this area is at your own risk.

Show respect:
Bergenhus Fortress is a protected national cultural heritage site, and we ask that visitors maintain respect for the buildings, ruins, monuments and park area. The lawns are free to use. Be kind to our trees.

Waste – Dispose of waste in the public waste bins.

Bring your dog – but keep your dog on a leash. Leash laws apply all year round.

Barbecues – Barbecues on portable grills and open flames are prohibited.

Drone flying – It is prohibited to fly drones over the fortress area. For permission in special instances, contact the Norwegian Defence Estates Agency.

What’s on at the Fortress?

By car – Bergenhus Fortress is adjacent to Bryggen, and is easy to spot when approaching the bay of Vågen by boat. Access by car from the north or south along the motorway (Norwegian national road 585). For parking, see Parking.

Taxi – There is a taxicab stand just outside the Main Gate (Bradbenken).